Below, Justice Jennifer Brunner appears with international law students and judges from various courts at the U.S. District Court, Southern District of Ohio in August 2016. 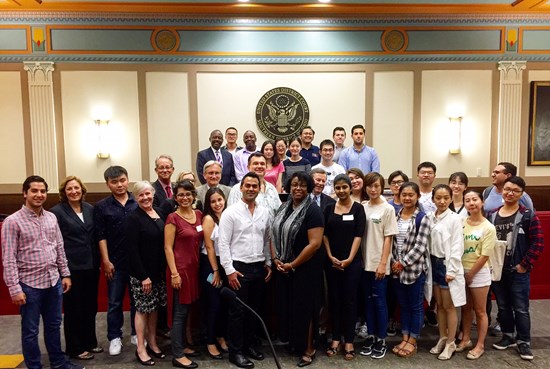 On November 3, 2020 Judge Jennifer Brunner was elected Justice of the Ohio Supreme Court.  Previously she served as a judge of the Tenth District Court of Appeals for 6 years and the Franklin County Common Pleas Court for nearly 5 years. As a trial court judge Brunner founded the county’s adult felony drug court, known as the TIES (Treatment is Essential to Success) Program, now in its seventeenth year of operation. She was elected Ohio’s first woman Secretary of State on November 7, 2006 and held the office for four years. While in that office, she became the first Ohioan to receive the John F. Kennedy Profile in Courage Award from the bipartisan board of the JFK Library and Museum in Boston. Justice Brunner has 17 years of private law practice experience and has provided rule of law technical expertise to the government of the Republic of Serbia, election observation in the Arab Republic of Egypt, and rule of law instruction at the bar association of Sri Lanka through the U.S. state department (USAID), gaining a greater understanding of the importance of  a strong judiciary to preserving peace and growing democracy through the rule of law.  A native of Springfield, Ohio, Justice Brunner has been married to Rick Brunner since 1978.  They have 3 adult children and 6 grandchildren, 2 dogs and 2 cats and spend time at their home in Columbus and at their farm in Columbiana County in Northeast Ohio.

Photo of Justice Jennifer Brunner can be downloaded here.