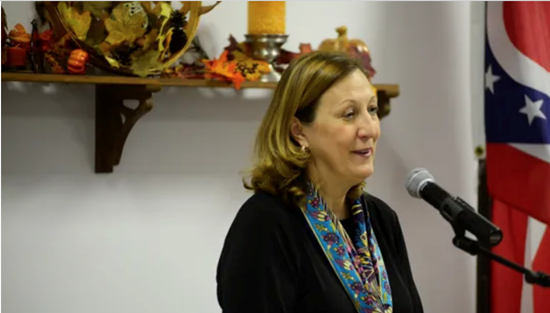 The Franklin County state appellate judge had her first date with her husband of 41 years at St. Peter's Catholic Church.

Brunner, who is running for the Ohio Supreme Court, paid a visit Thursday to the city and spoke at Richland County Democratic Party's Annual Fall Dinner.

The former secretary of state is running to challenge Republican Judith French, whose seat is up for re-election next year. French has been on the high court's bench since 2013.

"I've always been an independent thinker, and here I could be fiercely independent, and that's definitely what I think we need on the Ohio Supreme Court," Brunner said.

Brunner is joined in the Democratic field by Cuyahoga Common Pleas Judge John P. O'Donnell, who, according to Cleveland.com, has been circulating petitions for both French's seat and Sharon L. Kennedy's seat, which is also up for re-election next year.

Democrats won big in 2018, when Justices Michael P. Donnelly and Melody J. Stewart won their respective elections, trimming the GOP margin on the court to 5-2.

Brunner, on Thursday, said before she decided to throw her hat in the ring, Ohio Democratic Party Chairman David Pepper had been "asking her every two years" whether she would agree to run.

Brunner, also a former Franklin County Common Pleas judge, said Pepper, armed with polling data, argued to her this year that the race was winnable.

"The question became not 'should I,' but 'how could I not do this?'" Brunner said.

Brunner, citing the U.S. Supreme Court's decision in June that federal courts shouldn't play a role in fixing partisan gerrymandering, said the issue will fall to states to fix.

"Now, the U.S. Supreme Court has said that federal courts can't deal with gerrymandering, it's inevitably going to fall to the Ohio Supreme Court, if we don't elect enough people to the state legislature who do it in a coordinated, cooperative fashion between each other," Brunner said.

Ohio voters overwhelmingly passed an issue in 2018 to overhaul how districts are drawn for members of the House of Representatives. The new map will be drawn in 2021 and take effect the next year, after the next U.S. Census.

Brunner, calling Ohio a "microcosm of the rest of the country," said she wants to be on the bench when issues of police authority, criminal justice, and home foreclosures come before the court.

"Those things matter to individual people, and that's why I want to be there because I do believe I understand what those policy decisions way up in the tower can do to people who are walking around on the ground," Brunner said.

"Quite honestly, this could be a great turning point for the people of Ohio."

Brunner has served on the 10th District Court of Appeals in Franklin County since 2014. She became Ohio's first female Secretary of State in 2006 when she defeated Republican Greg Hartmann. In 2010, Brunner ran for U.S. Senate and lost to then-Lt. Gov. Lee Fisher, who then lost to Republican Rob Portman.